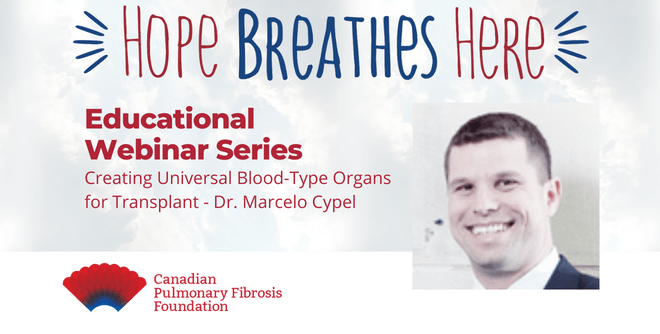 A team of Canadian scientists have proven it’s possible to safely convert the blood type in donor organs intended for transplantation. The findings are an important step towards creating universal type O organs, which would significantly improve fairness in organ allocation and decrease mortality for patients on waitlists. Dr. Marcelo Cypel, one of the scientists involved in the research will tell us more about it in this webinar.

Dr. Cypel is a Staff Thoracic Surgeon at University Health Network and an Assistant Professor of Surgery at the University of Toronto. He received his MD in 1999 and completed his general surgery and thoracic surgery residency program in 2004. In 2005 he started his post-doctoral research fellowship at the Latner Thoracic Surgery Laboratory supervised by Dr. Keshavjee, and he earned a Masters’ degree at the Institute of Medical Science/University of Toronto. During this time, he developed a new method of lung preservation and donor lung repair called Ex Vivo Lung Perfusion (EVLP). This method is now used clinically in Toronto and in many other centers, and has significantly increased the number of transplantable lungs.  He subsequently performed a 3 years fellowship in thoracic oncology, cardiac surgery, and lung transplantation at the University of Toronto. During his training, he has received 13 awards, including the McMurrich Award given for the best fundamental science work by any level trainee in the Department of Surgery and the 1st Annual Zane Cohen Clinical Fellowship Achievement Award. He also achieved a large number of 1st author peer review publications including high impact journals such as Science TM and The New England Journal of Medicine. His main clinical interests are minimal invasive thoracic surgery for lung cancer, treatment of pulmonary metastases, artificial lung devices, and lung transplantation.

Dr. Cypel academic interests are in lung transplantation, gene and cell therapy to repair injured organs, and the use of artificial lung devices. In thoracic oncology Dr. Cypel’s research is now focused in minimal invasive thoracic surgery, and the use of loco-regional therapies for the treatment of pulmonary metastases. He has recently earned a young investigator scholarship (Michael DeBakey Scholarship 2011-2013) from the American Association of Thoracic Surgery to develop an in vivo lung perfusion model to be used as a platform for various anti-cancer metastases therapies, especially for colorectal cancer and sarcomas.